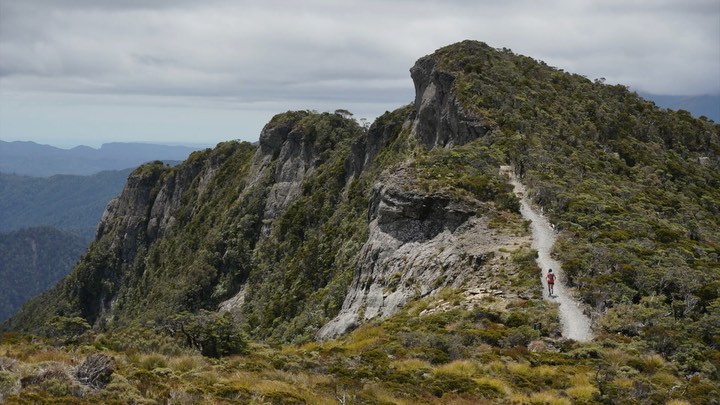 Yes, you read correct people are running the Paparoa Track in a day! Here is a great description from wildthings, followed by the fastest times on Strava for men and women. So what are you waiting for? Get training!

As a point-to-point this would be an equally good run in either direction. Starting from Blackball means you cut out around 300m of elevation, but don’t be put off starting from Punakaiki either.

From the SmokeHo carpark the track descends briefly to cross three bridged creeks before the uphill starts in earnest. From here the old packtrack climbs steadily through lush beech and podocarp forest, passing old hotel sites and relics from the mining heyday. This part of the track has not been upgraded and is rocky and sometimes slippery underfoot, but is a very runnable gradual gradient.

Just as you reach the alpine scrub zone you come across Ces Clark huts (old and new) – a great place to fill up on water and look at the view over the Grey/Mawhera valley. From Ces Clark the track continues to climb onto the open tops before turning north. The section between Ces Clark and Moonlight huts is about 10km, and undulates along the ridgeline past Mt Ryall. The track switches between both sides of the ridge, giving uninterrupted views alternately out to the Tasman and inland back over the Grey Valley.

Moonlight Hut sits on a spur just west of point 1104, around 19km from the start. From here the view is dominated by the unnamed escarpment to the north, which is where the track heads next. Soon after leaving Moonlight Hut and passing the turnoff to the Moonlight valley, the track moves into stunted goblin forest. A steady descent is followed by another climb to the edge of the escarpment. The track runs right along the edge of this near-vertical cliff face, providing amazing views over the Pororari headwaters and out to the Tasman.

After leaving the edge the track ducks in and out of bush, with views over an argillite basin and into the head of Pike River, before diving off into lush podocarp forest. From here the track switchbacks fairly steeply, descending beneath an impressive waterfall and winding between some big boulders. The gradient then mellows out as it follows the ridgeline south of Tindale Creek, though there are still plenty of undulations, before a brief climb up to Pororari Hut. This is a short detour off the main track, but again a good place to get water, and has lovely views out towards Punakaiki.

From Pororari Hut is a steady 5km or so downhill to the first swing bridge over the Pororari River, followed by a brief gently climb to gain the side of a gorge. Look out for rata flowering on the opposite side of the valley here. A flowing descent takes you down to the junction with the Inland Pack Track (right across the swing bridge) – head straight on towards Punakaiki. Soon the track splits again, with the foot traffic route heading up steps to the right and the mountain bikes keeping left. The foot route takes you out along the Pororari River, through a small cave and out to the car park at the end of the track.